Check it out and help spread the word!

“Join us Thursday, August 8, at 3 pm ET for a Google+ Hangout on wind energy in America. During the Hangout, you’ll have the opportunity to ask experts from across the industry anything you want about the wind industry — from the status of offshore wind projects to projections for industry growth to the logistics for setting up your own small turbine to power your home. For the first time ever, we’re also giving you the opportunity to join our Hangout on Air live and ask your wind energy questions directly to our panelists.

For a chance to be featured during the live discussion, submit your questions by emailing newmedia@hq.doe.gov, posting a comment on the Energy Department’s Facebook or Google+ page, or tweeting @ENERGY using #AskEnergy.”

A recent study by Civitas, The Institute for the Study of Civil Society, points out that wind farms actually produces more CO2 and related pollutants than would be used, if wind turbines were left running on grid power at all times.

The necessity of constantly turning on wind turbines when the wind is favourable, and off when the velocity is too high, along with the grid power necessary to maintain them, actually causes the operation of wind farms to produce more pollution than if the turbines used the grid to operate constantly.

Each time the grid is used to start turbines on a wind farm, a surge of electricity is needed to power up the fossil fuel station where the power originates. Thus, more CO2 and pollution is released into the atmosphere than there would normally be if the wind turbines either operated fully on the grid or were removed from it altogether.

Ruth Lea, author of the Civitas report states that by having to constantly switch on and off power from the grid to operate and maintain wind turbines, drastically increases CO2 and pollution levels above that, which would be produced if the turbines were always on grid power. They go on to say wind turbines only produce energy around 30% of the time, in a small window when the wind is favorable for operation. Thus, the other 60% is being supplied by the grid. Continue reading at:

Colin Graf, Toronto Star
SARNIA, ONT.—Lawsuits, marches and public meetings — these are the new signs of summer in rural Ontario as energy companies advance their plans for hundreds of wind turbines across the province. Opponents of large-scale wind farms gathered for a public meeting in the 600-seat Imperial Theatre in Sarnia on Wednesday night, designed to “bring what everyone thinks is a rural issue to the city,” said organizer Ingrid Willemsen. “In the city people don’t think this affects them, but everyone in Ontario will be paying double on their energy bills soon,” she said, predicting inefficiencies in wind power production.

Willemsen hopes educating urban residents about the costs and health effects of wind turbines will get them contacting the province and increase pressure to stop wind farms. The Sarnia meeting could convince other rural wind opponents to stir up their city cousins, she added.  “This could be duplicated in London…

A newly published peer-reviewed study reports U.S. wind turbines kill 1.4 million birds and bats every year, even while producing just 3 percent of U.S. electricity. The numbers reveal that President Obama’s global warming plan will kill hundreds of millions of birds and bats while doing little if anything to reduce global temperatures.

Even if no new wind turbines are ever built, turbine blades will slice 14 million birds and bats to death in mid-flight during the next decade. However, global warming alarmists say we must reduce carbon dioxide emissions by 50 or even 80 percent. President Obama’s recently announced assault on climate change appears likely to seek such numbers. Given that most global warming alarmists also vigorously oppose hydropower, natural gas power and nuclear power, reducing emissions by 50 to 80 percent would require increasing the number of wind turbines roughly 25 fold. That means killing 350 million birds and bats in the United States every decade. Continue Reading at: http://www.forbes.com/sites/jamestaylor/2013/07/29/president-obamas-climate-plan-would-kill-hundreds-of-millions-of-birds-and-bats/

Wind energy is one of the most romanticized forms of existing renewable energy. After all, it is simply energy produced by the wind, which will keep blowing whether we stick turbines in front of it or not. Free energy, right? Well, nothing in life is truly free. Despite the glamorized notions of how great this “free” energy is, someone always has to pay for it somewhere down the line. 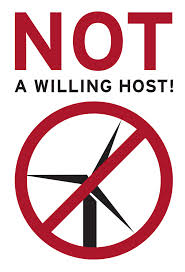 If you are able to, please show up to ensure the Niagara Region doesn’t Rescind their “Non Willing Host” Designation! Bring your Signs and T-Shirts!!!

Light winds have not silenced the residents of Carson Road, who have come to blows in the last year over several wind turbines.

By David Judd
The fight against wind turbines proposed near Port Ryerse has become more public and more personal.
Forty protesters waved signs and handed out information sheets last Wednesday on normally quiet Gilbert Road.
The road dead ends at the home of Anne and Wally Faulkner, a short distance from Lake Erie, west of Port Dover.
The unlikely occasion for the protest was the summer picnic of the Port Dover and Woodhouse Horticultural Society.
Society president Anne Faulkner hosted the picnic in her gardens.
The protesters had no bone to pick with the horticultural society. In fact, one prominent sign thanked the society for beautifying Port Dover and Woodhouse.
But the protesters, mostly from the Port Ryerse area backed by contingents from Haldimand and West Lincoln, strongly objected to the Faulkners and their neighbours — the Smiths, the Steinhoffs and the Woolleys — leasing land for four industrial wind turbines planned for the Port Ryerse Wind Farm. Continue reading article at: http://www.portdovermapleleaf.com/opposed-health-and-property-are-at-high-risk/