Earlier I told you about the changes to the way the funds we raise are being handled.  This change was made at the request of our legal team.  Essentially all funds raised by PECFN and APPEC are going into one pot.  The money in this pot will be apportioned to legal expenses totally at the discretion of our lawyer, Eric Gillespie.  As a result we established a new bank account called the South Shore Appeal Fund (SSAF).  We are transitioning to allow direct deposit into this account online with paypal.  Please make any cheques payable to South Shore Appeal Fund, and mail them to South Shore Appeal Fund, P.O. Box 173, Milford, ON  K0K 2PO.

Another transition is taking place in our web presence.  The url www.SaveOstranderPoint.org will be changed over the next little while to www.savethesouthshore.org. We thank Marilyn Sprissler for taking care of this for us.  The web site will continue to have important information about appeals and fund raising for both the Ostrander Point and the White Pines cases.

There are important dates for you to know about in January.  On January 15 the final oral presentations in the Ostrander Point ERT will be heard at 10:00am at Human Rights Tribunal Ontario (HRTO) Hearing Rooms, 14th Floor, 655 Bay Street, Toronto.  END_OF_DOCUMENT_TOKEN_TO_BE_REPLACED

One chapter of the Shirley Wind Farm saga ended this past week, but the story needs to continue for the sake of the people living near the wind turbines — and those living near turbines elsewhere.

To recap, Brown County Health Director Chua Xiong, after deliberations that went on over months and were obviously agonizing, ruled that she lacked scientific evidence to link the illnesses of some people living near the eight-turbine wind farm in southern Brown County. Xiong’s opinion is not shared by Dr. Jay Tibbetts and others on the county Board of Health — who last year declared the turbines a human health hazard — but it’s what Xiong felt she had to do based on the evidence at hand.

It’s not an issue with easy answers. A Shirley-area mother I interviewed on her family’s farm several years ago told me how one of her children became quite ill after the turbines began operating, while another seemed barely affected.

But the story needs to continue because the ruling doesn’t make people’s symptoms go away. It doesn’t mean the affected people suddenly can sleep through the night, that some no longer experience nausea and vertigo, that none suffer other effects of what is being called Wind Turbine Syndrome.

In some people, the illnesses are still there.

The focus now needs not to be on assigning blame. It needs to be on helping the people who can’t shake their illnesses — and who in a number of cases are trapped because they can’t sell their homes and couldn’t afford two mortgages.

Now that a second Auditor General’s Report has severely criticized Ontario’s electricity system, it is time to rethink a politically motivated energy policy. Action on climate change must not squander crucial time and resources on schemes that may be ineffective, economically unfeasible, or harm human health and the environment.

Why did the Government of Ontario choose to ignore the 2011 Auditor General’s Report that questioned the negligible ability of intermittent wind power to lower carbon emissions because natural gas-fuelled back up is required 24/7?

The Multi-municipal Wind Turbine Working Group, made up of councillors from jurisdictions where wind turbine development has been most intensive, is ideally positioned to observe first hand the effects of wind turbines on the local community. Adverse health effects are occurring to citizens exposed to wind turbines at approved setbacks. Noise and health complaints have been ignored by government officials. Restrictive Environmental Review Tribunal procedures under the Ontario Green Energy Act make residents’ participation meaningless. Biologists’ observations of degradation of significant habitat and loss of biodiversity near wind turbines have been disregarded.

Because of wind power’s difficulty in matching production with demand, a substantial amount of the emission-free electricity from hydro and nuclear plants is being dumped (in order to stabilize the grid) because the Government’s energy policy gives priority to nominally “green” wind energy. This results in throwing away a large portion of the “base load” electricity already paid for by consumers.

At the same time, much of the excess wind energy has to be sold outside the province at below production cost. This drives down the market price for electricity and means that Ontario is often forced to dump surplus electricity to our neighbours in New York and Michigan at negative prices – paying them to take it, further penalizing Ontario consumers.

The Auditor General’s 2015 report discloses that 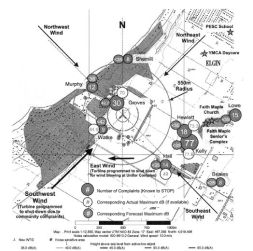 Through a Freedom of Information (FOI) request, Saugeen Shores Turbine Operation Policy (S.T.O.P) received data detailing 300 complaint-driven observations of noise emissions from the CAW/UNIFOR turbine. The Town’s Notice of Motion said “these observations appear to reveal several incidents where noise emissions from the UNIFOR turbine exceeded the noise standards set by the the MOE.. .which have not been previously disclosed either to the Town of the public at large.” The majority of complaints dealt with sleep disturbance, but also included reports of headaches, nausea, vertigo and other health-related issues.

S.T.O.P spokesman Greg Schmalz brought the information to Council in September at a community forum, and after a review of the data, Saugeen Shores Deputy-Mayor Luke Charbonneau, and Councillors John Rich and Mike Myatt, tabled a Notice of Motion at the Dec. 14 Council meeting to invite CAW/UNIFOR and the MOE to “share and review” the data at a meeting with the Town and S.T.O.P.

Regardless of support or opposition to wind energy, Coun. Rich said “you have to be in support of openness and transparency” by the MOE and CAW/UNIFOR, because “secrecy breeds mistrust.”

“What we want to see is more openness and opportunity for everyone to have discussion. If there is no problem, there is no issue, then things go the way they are. But if there is a problem, then it must be addressed at that time, but I think it’s important that we add a little sunlight to this and make sure we know what’s going on,” Rich said.

Deputy-Mayor Charbonneau said the “real nub” of their Motion is the existence of the FOI documents that “indicate, or at least gives the appearance, that the CAW/UNIFOR turbine has been operating in exceedence [sic] of its noise limits.”

He said that although the MOE required, and CAW/UNIFOR promised, third-party testing to verify turbine operation compliance, it is “concerning” that they have no evidence, and hopes the meeting will get the parties together to determine if the turbine is operating within the provincial guidelines.

Mayor Mike Smith recounted how CAW/UNIFOR had refused a past Town request for the resources to have independent testing done, and said there’s been no contact between the Town and CAW/UNIFOR for several years.

Speaking during the regular open forum prior to the Dec. 14 Council meeting, Schmalz said if the requested meeting occurs, S.T.O.P. will make “simple and reasonable” requests to address the main complaint of sleepless nights by shutting down the turbine from 7 p.m. to 7 a.m.

The Cotton Farm Residents’ Association (CFRA) was set up in January 2013, after eight wind turbines were installed on the former airfield at Graveley, near St Neots. CFRA has already won a concession from operators, Greencoat, who are running the turbines in “curtailed mode” to alleviate the noise problems, but according to campaigners this has been unsuccessful in terms of reducing the noise.

But the CFRA hopes new evidence from the Independent Noise Working Group (INWG) could lead to an overhaul of planning conditions and tighter controls on installing turbines so close to homes.

Conservative MP Chris Heaton-Harris, presented the INWG report to Government a few weeks ago and says: “This type of noise has been ignored by developers and government until recently, but there is a growing body of evidence that demonstrates the nuisance.

“I have been lobbying ministers about the issues and presented them with evidence proving how damaging this noise can be and suggesting solutions.”

Data from the Graveley noise monitor has been presented to the minister in an effort to expose the devastating effects of noise for those living close to wind turbines.

Graveley resident Bev Gray, who sits on the INWG, said: “The Cotton Farm data is playing an important role in adding to the wealth of evidence and knowledge in providing an alternative methodology of controlling noise from wind farms.”

Dear APPEC Supporters,
The evidence phase of the ERT on the White Pines wind project has concluded. The ERT will return to Prince Edward County on January 20, 2016. Two days, the 20th and 21st , have been schedule for oral submissions. The location is to be announced.

Our great thanks to everyone who attended the hearings. Although the Tribunal members never acknowledged your presence we know it made a difference.

The volunteers who provided coffee, lunches and other refreshments during the long days of hearings deserve special mention: John Ambrose, Janice and Gord Gibbins, Janna McCarthy, Janet and Doug Murphy, Orville Walsh and others – thanks to all of you.

On Day 21 the Environmental Review Tribunal (ERT) heard the last witness in the appeal of the White Pines wind project.

APPEC tried to call three Reply Witnesses: Dr. Shawn Smallwood, an expert in avian wildlife behaviour and conservation; Robert McEwen, P. Eng., a structural engineer; and Kari Gunson, a road ecologist. Mr. McEwen and Ms. Gunson were intended to respond to WPD’s witness Shawn Taylor, who had done a survey of municipal roads on the day before he testified. Eric Gillespie, counsel for APPEC, asked the Tribunal either to disallow the new evidence collected at the 11th hour or to allow APPEC an opportunity to respond. Mr. Gillespie argued that each party should have an equal opportunity to reply to the full submission of the other. END_OF_DOCUMENT_TOKEN_TO_BE_REPLACED

“There’s no free lunch.” I hated it went my dad used to say that. It meant I was going to have to pay up. He wanted me to understand there is almost always some kind of cost that has to be paid if you want to receive benefits. My father’s words came back to me as I listened to the recent reports about the costs of Ontario’s electricity system. These reports have sparked a healthy debate. But the best debates are the best informed. To help shed more light, I have some insights that can help inform the debate around the costs of our electricity.

When we formed the government in 2003, we discovered pretty quickly that after years of neglect, Ontario’s electricity system was in desperate need of costly repairs and new investment. In the previous decade, electricity generation had fallen by 6 per cent while demand had grown by 8 per cent. During the summer of 2004, we made an extraordinary request of Ontarians asking them to dramatically reduce their electricity usage because we didn’t have the power to meet demand.

What’s more, our electricity system had become a huge North American contributor to air pollution. At the same time the previous government had increased our reliance on coal by 127 per cent, doctors were warning us that our coal plants were responsible for 1,800 premature deaths and more than 300,000 cases of illness every year. The single greatest cause of children visiting Ontario hospitals was asthma, aggravated by bad air. Economists told us coal was costing us $4.4-billion every year in health and environmental costs.

Mr. James, qualified previously as an acoustician, presented new evidence in reply to Denton Miller, witness for the Ministry of Environment and Climate Change (MOECC).  Following new ministry guidelines and omitting disallowed wind turbines T7 and T11, he calculated that 13 “points of receptions” (i.e., homes) would suffer noise above 40 dBA.

END_OF_DOCUMENT_TOKEN_TO_BE_REPLACED 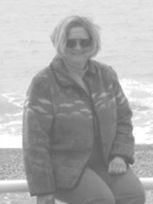