By Physicians for Civil Defense|January 14, 2019

The mining of the rare minerals needed for photovoltaic cells and the generators in wind turbines, and the production of the steel and concrete for the towers, are neither clean nor green, she stated. Much of the environmental impact and human cost is exported, as to China and Africa. The U.S. no longer mines rare-earth elements.

By 2050, the amount of solar panel waste in the world, already at 250,000 metric tons at the end of 2016, could reach 78 million metric tons, according to the International Renewable Energy Agency (IRENA). When panels are broken, as by hail, tornadoes, or hurricanes, pollutants such as lead or carcinogenic cadmium can be almost completely washed out of the fragments by rainwater over several months.

Wind turbines have been called the “rotors of sickness,” and the German Ministry of Environment has been accused of covering up evidence of harmful levels of infrasound, sound at too low a frequency to be heard. Effects include reducing cardiac muscle strength. Infrasound affects the inner ear and the brain and can cause sleeplessness, emotional reactions, and many other distressing symptoms. It has been investigated for use as a weapon.

Rooftop solar panels have caught fire, and nearly destroyed an apartment complex in Holland, while releasing toxic fumes. Wind turbines have been described as a “perfect incendiary device.”

“Energy poverty due to unreliable and unaffordable energy is also a major health threat,” she added. “Carbon-based fuels supply 80 percent of the world’s energy. Why are they not considered ‘green’? The carbon dioxide they release is essential for life and is measurably greening the earth.”

Physicians for Civil Defense distributes information to help to save lives in the event of war or other disaster.

“The dBA metric is, therefore, unsuited for evaluating airborne pressure waves occurring at frequencies below 800 Hz. Health effects that may be developing due to exposures at these lower frequencies cannot be properly studied if the dBA metric is being used to characterize acoustical environments.”

Within the context of noise-induced health effects, the impact of airborne acoustical phenomena on biological tissues, particularly within the lower frequency ranges, is very poorly understood. Although the human body is a viscoelastic-composite material, it is generally modeled as Hooke elastic. This implies that acoustical coupling is considered to be nonexistent at acoustical frequencies outside of the human auditory threshold. Researching the acoustical properties of mammalian tissue raises many problems. When tissue samples are investigated as to their pure mechanical properties, stimuli are not usually in the form of airborne pressure waves. Moreover, since the response of biological tissue is dependent on frequency, amplitude, and time profile, precision laboratory equipment and relevant physiological endpoints are mandatory requirements that are oftentimes difficult to achieve. Drawing upon the viscoelastic nature of biological tissue and the tensegrity model of cellular architecture, this chapter will visit what is known to date on the biological response to a variety of different acoustic stimuli at very low frequencies.

Infrasound occurs where large masses are in motion. This happens in nature – with avalanches and earthquakes, for instance. But infrasound also arises through technology and industry. It’s caused by large machines and blasting. Even wind turbines …

Infrasound Noise We Can Not Hear: video 28 minutes 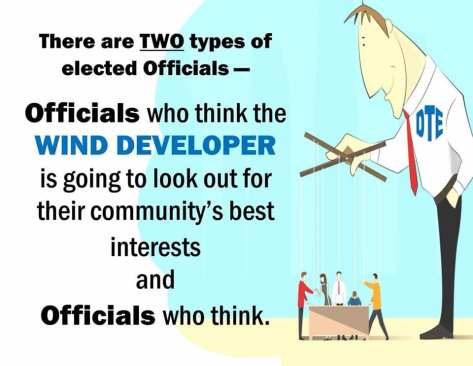 The very sad outcome is that nothing has changed since 2009.

Sylvia, the PC Party of Ontario repealed the Green Energy Act Dec 3, 2018 and the same day introduced ERO 013-4265 (as well as two others).  This proposed regulation will grandfather ALL “in-process” and “existing” wind projects under the old Green Energy Act. This is NOT what the PC Party promised the people of Ontario.  What is described in Barb’s letter is still occurring in YOUR riding; nothing has been done to help these people.  Approving ERO 013-4265 will condemn these people to the “hell” they have been living as described in 2009.  When did democracy die in Ontario?  We believed the new majority PC Party would keep their promises still posted on their web site.  To date any actions of the PC Party towards people living with industrial wind turbines have been nonexistent.

Yes, we acknowledge the PC party did cancel many “green” projects but chose not to cancel the pre construction Nation Rise Wind project in North Stormont (only 1 of 2 LRPI projects not cancelled even though this project had its key milestones approved by IESO hours before the writ was dropped).  Presently, we the constituents are demonstrating to Ministers Rickford and Phillips how and why this project must be cancelled.  If allowed to proceed the majority PC Government of Ontario will have allowed another part of Ontario to be put in jeopardy; Nation Rise Wind project is located on recognized highly vulnerable aquifers, the West Quebec Seismic Fault, vibration sensitive Leda clay; all of which the proponent did not report to the Ministry of Environment.  Need I go on….

Sylvia it is time that like Tod Smith,  you, Lisa Thompson, Monte, Bill Walker, Sam Oosterhoff, Rick Nicholls, Randy Hilliard, Toby Barrett do what you asked the Liberals to do in Lisa’s 2012 Private Member’s Bil, in Sam Oosterhoff’s 2017 Private Member’s Bill AND in the 2018 campaign; stand up for YOUR constituents; do your fiduciary duty; DO NOT allow ERO 013-4265, address the issues.  As Monte so eloquently said in 2012,”I believe in democracy.  I believe in giving a voice to rural Ontario.”  Monte, too, has let his constituents down.

No one asked for this. Nobody looked to have their life and homes exposed in the news, trying to explain how the most promising form of renewable energy was causing such destruction of their family.

Sleep deprivation, headaches, migraines, heart palpitations, tinnitus, pressure in the ears, sores that won’t heal, dangerously high blood pressure and the list goes on. This was not the plan that any of these quiet and unassuming rural families had in mind, but this is what they got. And countless months later it continues.
Nobody wanted to get sick; nobody wanted to be forced to leave their home, the place they raised their children, the place they intended to live out their retirement. Not one of them asked for this. In almost all cases, these symptoms were non-existent before the start up of the wind farm.

“The residents and their backers at Wind Concerns Ontario – a provincial anti-wind farm group – are not ready to give up the fight. Their spokesperson Margaret Benke says they have 30 days to request a review of the decision, and they intend to do so.”

FINCH — An attempt by a group of residents from North Stormont to try to quash a wind power project from being constructed in the area ended in failure on Friday, after the Ontario Environmental Review Tribunal ruled they had failed to prove windmills would harm human health, local animal and plant life, or the environment.

The Concerned Citizens of North Stormont had appealed a renewable energy approval the Ministry of the Environment had granted to allow the project, Nation Rise Wind Farm GP Ltd., to proceed.

The process to arrive at a decision took many months. Weeks of hearings were held in Finch and Toronto, where the participants brought in dozens of experts to argue both sides about the potential impacts of the wind farm on people and the environment while being cross-examined by lawyers.

Well, after 6 years, it’s time to close down QuixotesLastStand.  I’ve been an environmentalist crusader since my first walkathon to save the whales, before I was even a teenager.  Now, almost 50 years later, it’s time to pass the torch to a younger generation.

With his degree in forestry, Paul has been relentless in his desire to get people to understand the importance and value of keeping and planting MORE trees, to help the environment, rather than cutting them down to put up useless, inefficient and unreliable wind turbines whose destruction to the earth far outweighs any meagre benefit they give.

Paul and I have done what we could to warn of the serious environmental issues surrounding industrial wind turbines and the greedy multinational billion dollar corporations and politicians who get rich off of them.

We, as a whole, can work to help this planet without seniors dying of hypothermia because they can’t pay their electric bill, or by forcing families into energy poverty resulting in some losing their homes.

For now, Paul and I would like to just spend our remaining years, enjoying the fruits of our many years of labour, without the stress of daily combat.

This site will close down in a few weeks.  Thank you to all of our thousands of followers over the years.  We value your support and wish you well in your continued crusade against the tyranny of New World Order globalist liberals whose sole aim is to rob us of the freedoms and rights we’ve enjoyed for so long and to deprive our children and grandchildren of the good fortunes and first world basic necessities and conveniences we’ve taken for granted.

Should anyone wish to take over Quixotes, please leave a comment below.  It is a treasure trove of research articles and important items related to the ecological devastation wrought by these monstrous machines.

All the best to everyone,