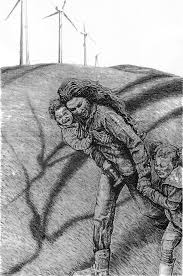 THREE SIBLINGS WHO claimed their family had to abandon their home due to illnesses allegedly caused by a nearby windfarm have secured €225,000 as a settlement of their High Court damages claims.

The awards, were part of settlements made without admission of liability, made to Laura, David and Jack Kelleher.

The siblings claimed that they, along with their parents, had to leave their family home at Gowlane North, Donoughmore, Cork in late 2016 several months after a ten-turbine wind farm went into operation.

They claimed that the noise, vibrations and shadow flicker from the turbines, located just over 700m from their family farm, resulted in them suffering from various illnesses.

The actions were also against company director Michael Murnane of Gortyleahy, Macroom, Cork, who is the owner of Green Energy Supply….

In Ontario, Canada, between 2006 and the end of 2016, government records provided by the former Ontario Ministry of Environment and Climate Change documented that neighbors living near industrial wind turbine (IWT) facilities filed 4574 noise complaints/incident reports. In some cases, these records also included occurrences of adverse health effects being experienced by some of those living near the IWT facilities [1]. The risk of harm associated with living near IWT energy facilities is controversial and reported globally [1] [2] [3] [4]. Some families have been billeted by, or negotiated financial agreements with wind energy developers [2], and some took the step to vacate/abandon their homes [2] [3] [4] while others have felt forced to do so [3] [4]. While the action of vacating/abandoning a family home is internationally reported [1] [2] [3] [4] research about these occurrences is limited. Utilizing the Grounded Theory (GT) methodology, an ethics approved community-based study was conducted to investigate these occurrences. Participants in the study included those who had vacated/abandoned their homes in the past, or at the time of the interview were contemplating to do so, or decided to remain. Between October 2017 and January 2018, sixty-seven (n-67) consenting participants were interviewed. This article presents preliminary results which will be augmented by additional submissions to peer reviewed scientific journals for their consideration for publication.

A Port Elgin couple who allege the Unifor wind turbine in Port Elgin caused a long list of debilitating health issues will be part of the conversation Feb. 25 on TVO’s “Political Blind Date.”

The edition features Bill Walker, PC MPP (Bruce-Grey-Owen Sound) – who has called for a moratorium on new wind power development – and Associate Minister for Energy, and Peter Tabuns, NDP MPP (Toronto-Danforth) and the debate will include hydro rates, energy policies, and community windmills…..

The turbine debate edition airs Feb. 25 at 9 p.m. After that date the episode will be available at;
TVO Website https://www.tvo.org/programs/political-blind-date
YouTube:  https://www.youtube.com/user/tvochannel