The Unifor wind turbine continues to generate ongoing noise complaints and the residents are fed up with the Ministry of the Environment and Climate Change failure to act. 100’s of complaints and counting. The industrial wind turbine is located adjacent to at least 100 homes within 550 metres of proximity and no independent third party noise audit completed to date.  Turbines and their noise do not make good neighbours. 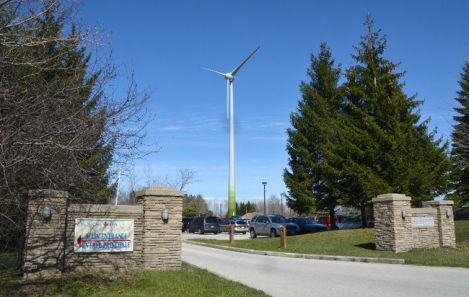 Saugeen Shores council is once again taking aim at the Unifor wind turbine.

Council passed a resolution seeking to hire a third-party to conduct parallel testing when the union carries out an acoustic audit this spring of its wind turbine, located at its family education centre at the south end of Port Elgin.

Mayor Mike Smith says there’s ongoing frustration with the Ministry of Environment and Climate Change over inaction toward the turbine, pointing hundreds of complaints have been filed and preliminary data suggests the turbine has operated outside of its noise regulations in the past.

Smith says they are fed up with the Ministry of Environment.

The delays in completing the acoustic audit prompted Saugeen Shores council to file a complaint with the Ontario Ombudsman’s office this past October and Smith says he recently received confirmation that the ombudsman is still investigating the complaint.

About 100 homes and cottages are located within the 550-metre setback typically required for industrial wind turbines.