Wind turbines are killing bats, including ones on the endangered species list, at nearly double the rate set as acceptable by the Ontario government, the latest monitoring report indicates. 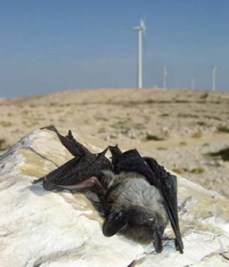 Bats are being killed in Ontario at the rate of 18.5 per turbine, resulting in an estimated 42,656 bat fatalities in Ontario between May 1 and October 31, 2015, according to the report released by Bird Studies Canada, a bird conservation organization.

Ontario’s Ministry of Natural Resources has set 10 bat deaths per turbine as the threshold at which the mortalities are considered significant and warrant action.

The bats being killed by turbines in Ontario include the little brown bat, tri-coloured bat, eastern small footed bat, and northern long-eared bat, all on the endangered species list.

The Birds Studies Canada report draws its information from a database that is a joint initiative of the Canadian Wind Energy Association, Canadian Wildlife Service, Ontario Ministry of Natural Resources and Bird Studies Canada.

Brock Fenton, an expert in the behaviour and ecology of bats and professor in Western University’s department of biology, said the bat deaths are a concern.

Bat populations across North America have been plunging with the emergence of a fungal disease called white nose syndrome.

Birds are taking less of a hit from wind turbines, according to the report, with an estimated 14,144 non-raptors killed by wind turbines and 462 raptor fatalities between May 1 and October 31 in 2015.

The report noted that some wind farms have moved to reduce bat mortalities by cutting their turbine speeds from dawn to dusk in the late summer and early fall.

A spokesperson for the Canadian Wind Energy Association said the association is concerned about reports that are based on limited data that have the effect of boosting estimates.

In response, CanWea is developing its own system that will be released this fall that is designed to improve existing and proposed bat regulations, said Brandy Giannetta, CanWea’s Ontario regional director.

“It aims to achieve this in part by enhancing knowledge of the existing data in order to drive science-based policy decisions and also by providing avoidance, minimization, and mitigation options that we hope operators and regulators alike will find useful in conservation efforts,” Giannetta said in an email.

Wind Concerns Ontario, a coalition of provincial groups opposed to wind farm development, said it is concerned that birds and, significantly, bats are being killed in numbers that were not forecast by either the Ontario government or the wind power developers.

“The population of the Little Brown Bat in particular is now at 5-10 per cent of its historical levels, so, as the Environmental Review Tribunal stated in the White Pines decision in Prince Edward County, even a few deaths will have a serious impact on the species as a whole. And we know for a certainty that bats are killed by wind turbines,” Jane Wilson, president of Wind Concerns Ontario, said.

It is critical to understand that wind power projects shouldn’t be approved without a full and objective assessment of all factors in any given location. The government’s push for wind power has to be balanced with the continuing need to protect the natural environment, Wilson said….

One thought on “Wind Turbines Killing thousands of birds and bats”