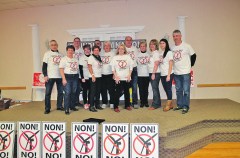 About 170 people attended a rally and fundraiser organized by “Save The Nation” in St-Bernardin. Group member Steve Dick said members of the group are still feeling “shock and even anger” after a RES Canada won a contract for a 32-megawatt wind farm in St-Bernardin. “They weren’t expecting the approval to go through,” said Dick.

“Both the premier and MPP Grant Crack had said communities that had voted themselves not a willing host would not likely see projects go forward.” There isn’t much the group can do to fight the project at this point, said Dick, who says he feels the province’s approval process was unfair. “It’s really difficult,” he says, “There’s no real recourse, other than continued public awareness,” he said. There’s no formal appeal process, but group may lobby the landowners who have agreed to host wind turbines, he said. 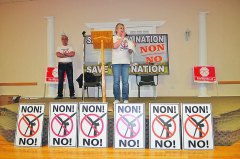 Res Canada’s Gauthier wind farm is one of five proposed wind projects in the country to win a contract from IESO, and one of three wind projects proposed in “not a willing host” communities.

One thought on “Big Turnout for Wind Protest Rally”