Steve Paikin is TVO’s Host for the Agenda. This letter from a Niagara Resident makes excellent points which demonstrate the corruption in Ontario Canada due to the current Liberal Government. Hopefully they will see some change in economic policy as it is scary to see what will happen for our childrens future! 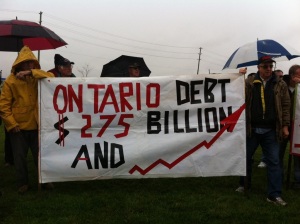 Your guest Jatin Nathwani  (Nov. 26, 2013) provided an overview of the problems contributing to the increase in electricity prices in Ontario, a problem that will indeed determine the future of this province. He eluded to the origin of this problem but really needed more time to expose the fundamental flaws.

When former premier Dalton McGuinty “chose a lane” with the direction he was going on the energy issue, his advisor was Minister of Energy – George Smitherman.

In Psychology 101 you learn that the best predictor of future behaviour is past behavior. Prior to becoming minister of Energy George Smitherman was the Minister of Health. Under George’s watch in the Health Ministry we find  the eHealth scandal and the Ornge scandal.

According to Rob Ferguson and Robert Benzie Queen’s Park Bureau, Published on Tue Mar 06 2012  the spin-off of the troubled ORNGE air ambulance service was done without competitive bidding thanks to an exemption sought by then-health minister George Smitherman…the deal was not subject to a request for proposals (RFP) from prospective operators of air ambulances in 2005…
An amendment passed in the Legislature gave the minister authority to establish this. This unusual move, which appears to contravene traditional government practices on bidding, was approved by Smitherman and was solely for ORNGE.
Opposition parties noted a lack of competitive bidding is also what led to the spending scandal uncovered at eHealth Ontario after Smitherman left the health portfolio.
As the scandal and OPP investigation into financial irregularities at ORNGE have shown, there wasn’t enough government oversight. When you avoid a competitive, open, fair bidding process, you open the door for what has happened at ORNGE and eHealth. ORNGE set up a web of for-profit companies to capitalize on the $150 million a year the air ambulance service got from Ontario taxpayers.
The health ministry sent in forensic auditors to check the books and the government has since taken steps to shut down the complex web of for-profit companies at ORNGE aimed at selling consulting services overseas.”

Fast forward to 2009 and we find the $7 Billion deal that Energy Minister George Smitherman  signed with a Korean Consortium – Samsung . According to the Auditor General’s Report 2011 p.88 the objective of the audit was to access whether the Minister of Energy (Ministry) and the OPA had acquired systems and procedures in place to -“ensure that renewable energy resources are obtained in a cost effective manner and within the context of applicable legislation and government policy.”
p. 90-91 “The Ministry (of Energy) negotiated a contract with a consortium of Korean companies to build renewable energy projects…… ( a $7 BILLION deal that the taxpayers of this province are expected to pay) However, no economic analysis or business case was done to determine whether the agreement with the consortium was economically prudent and cost effective, and neither the OEB nor the OPA was consulted about the agreement”
According to the Auditor General’s Report 2011 the Cabinet was informed of this decision, so they did not vote on this contract either.
With no due diligence, no input from the OEB or the OPA, no democratic vote from the people that we elected to serve and protect us, is this another questionable contract?

With the creation of the Green Energy Act, the Ontario government changed laws that protected the health of the citizens of Ontario, changed laws that required an Environmental Assessment to determine the impact of new development on the environment and changed laws so that the authority of municipal councils has been undermined.  The rural citizens have had their municipal councils stripped of their planning rights to control the siting of Industrial Wind Turbines in their communities.
Premier McGuinty’s  government ignored many experts at the time of drafting the Green Energy Act. What resulted is a situation that benefits huge power developers, but not the people of Ontario, who are seeing communities destroyed by industrialization; plummeting property values; people being made sick by the environmental noise; destruction of natural habitat and the killing of wildlife, and finally, punishingly high electricity rates.

When former Premier Dalton McGunty chose the Minister of Energy Smitherman plan for renewable energy in Ontario he drove us directly into the ditch. With no due diligence, no input from the OEB or the OPA, no democratic vote from the people that we elected to serve and protect us, what exactly do the people of Ontario get? We get to pay private for profit frequently multi-national corporations huge profits for the Feed-in-Tariff subsidies for wind and solar. As energy consumers we pay for surplus energy  that we then pay other jurisdictions to take from our grid. We get to watch our industrial base leave for lower electricity rates in New York and Quebec where the electricity Ontario supplies is offered at a much more competitive rate. We get to watch our rural environment destroyed as we install industrial wind turbines and solar panels – inefficient, intermittent sources of power that only work when the wind blows and the sun shines. We get to spin our wheels and dig ourselves into a debt that will bring this province to it’s knees. The poor and those on fixed incomes will be driven into “energy poverty” where we have to decide to turn the heat up and the lights on or pay for food and shelter.

Resident of the Niagara Region