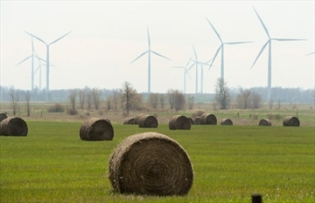 Renewable energy sources are a cautionary tale. The article “600 sheep maintain the grounds around solar project” by Diana Martin in the August 1, 2017 (Ontario Farmer) paper provided much insight into the Samsung Southgate Solar project, but much was left unsaid.

The Samsung Southgate Solar Project went on line in December 2016. The nameplate capability is 50 MW of solar energy produced from 192,160 solar panels. Technically the potential production should be 50 MW of energy produced each hour, but when you look on the Independent Electricity System Operator (IESO) website – reports.ieso.ca/public/GenOutput you find that solar projects only produce energy when the sun shines so production is zero for ten hours per day.

The total days production from the Samsung Southgate Solar Project on August 17, 2017 was 90 MW or 3.75 MW per hour! According to IESO Ontario requires an average of 22,493 MW of energy produced each hour to keep the lights on, the refrigerators running and the industry rolling. The demand on Aug 18 at 8:00 AM was 16,810 MW of power.

If we consider the contribution of the Samsung Southgate Solar project to the total energy required 3.75/16810 = 0.02 % of the production required. So we would require 4,482 solar projects of this size to provide the power the province needs. Of course since no solar energy is produced at night and production decreases when the sun is not shining we would have to rely on natural gas or nuclear or hydro – the baseload power generators of the province – to provide the power needed. Actually we would be relying on baseload power for 99.98% of the power required.

This solar project required 350 acres of farm land so 350 X 4482 projects = 1,568,700 acres of farm land would be required to produce  intermittent energy rather than food for the people. The production of solar panels requires silicon solar cells, typically an aluminum frame, glass sheets, copper wire and plexiglass. Additionally, solar panels contain heavy metals such as cadmium, lead and rare earth elements such as gallium and indium. So the production of a solar panel is not really “green” and should have a C02 tax on the production side. The panels require a complex recycling mechanical and thermal treatment process. In Europe the EU dictates solar panel disposal guidelines in the waste of electrical and electronic equipment directive, but no such guidelines exist in Canada. We are not preparing for large quantities of photovoltaic solar waste. The panels may have salvage value but the process is not ‘green’. So we have a CO2 cost on the production side and a CO2 cost on the disposal side. The cradle to grave CO2 costs in the mining of components, manufacturing of parts, transportation, installation, maintenance and decommissioning all has to be calculated to get the true CO2 cost. Is a 10 year life span enough to create a positive CO2 balance in the use of solar panels?

According to Don Lewis in the Aug 1, 2017 article the contract for the solar park is for 25 years and several change outs of solar panels are expected. In fact a number of European solar farms have switched out their panels twice in the last decade! So if the 192,160 panels are switched out 3 times in the 25 years we have 576,480 – over half a million – panels on their way to a toxic waste dump.

The cost of solar panels has gone down from $750 to $220 per panel but paying to change out over half a million panels will add $127 million to the  maintenance costs of this project. Sure makes me wonder how much Ontario ratepayers are paying for the energy produced from this project!

Mr Lewis claims that the project is a “win-win” situation for him. He is paid rent for his land from Samsung and his sheep are grazing in the enclosure. My thinking is that the ratepayers of Ontario energy have been tossed to the coyotes that pace the fence.

One thought on “Renewable Energy: A Cautionary Tale”