Niagara West-Glanbrook MPP Sam Oosterhoff :
“The Liberal government forced turbines on municipalities across rural Ontario against the wishes and concerns of residents and communities such as West Lincoln,” said Oosterhoff. “This stubborn initiative of the Liberals shows no respect for municipalities or for the ordinary concerns of Ontarians.”
“Industrial wind turbines are one of the causes of our sky-rocketing energy costs because of the unaffordable contracts made by the Liberals,” noted Oosterhoff. “Heat or eat is not a decision people should have to make.”
“The Liberals have a long history of ignoring municipalities and local residents. The NDP pretend to support local decision-making, but instead they supported the legislation that left municipalities without a voice on the placement of industrial turbines,” said Oosterhoff. “Tomorrow, they will have a chance to make amends and show respect for our communities by voting for my Motion.”
Motion:

“That in the opinion of this House, the Government should place a moratorium on the installation of industrial wind turbines in unwilling host communities in the Province of Ontario.” 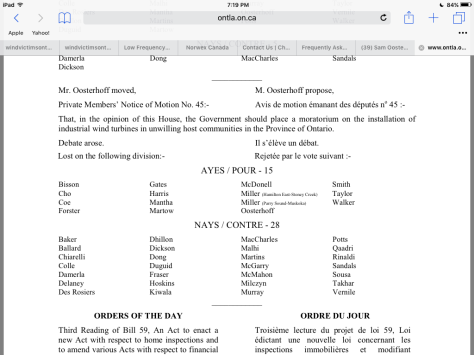