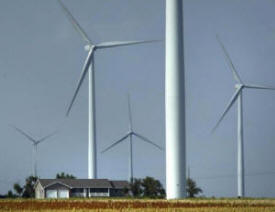 “Pressures to stop (new) wind energy production in Ontario have increased significantly since the controversial GEA. “

Opposition to wind turbines is facing a growing resistance not just in Ontario but globally. The acceptance and excitement over using an alternative way to generate electricity has  given way to the bitter nightmare  faced by abutting residents who are adversely impacted by these massive and intrusive structures. Courts worldwide are increasingly rendering decisions to compensate families and individuals who have been harmed.

The Toolkit document opines (give it a read and try not to choke on the obvious) as to why a few (smaller) turbines in a less densely populated rural area will meet with less resistance than clusters of hundreds (increasingly larger machines) placed adjacent to towns and settled areas.   It is suggested that entering into a more intimate relationship with wind development will mitigate the harms of not being able to give consent.

This is a false and misleading conclusion as landowners who host wind turbines have given witness that they too were harmed even when money was received.

“The ultimate goal is fairer and much less divisive turbine facility siting outcomes when governments and communities themselves decide that turbine development is the policy path they wish to pursue.”  Toolkit for Turbines: Wind Energy Development in Ontario and Nova Scotia, Canada

Harm from wind power will not be remedied with the stated goal. The document fails to address a fundamental flaw in reasoning- which is to examine if turbines justify the negative documented outcomes. Simply put the wind turbines are not fit for purpose. To continue to pursue an energy policy that accepts inflicting harm on a few without remedy and without proven benefits for the greater good is wilful blindness.

View this document on Scribd

One thought on “Toolkit for Turbines”