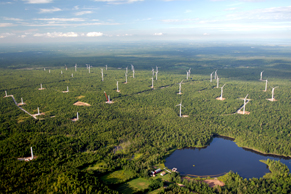 “Take care of the land, because they aren’t going to make anymore.”

Wendell Berry, an American environmental activist, cultural critic and farmer says it best: “The economy of money has infiltrated and subverted the economies of nature, energy and the human spirit.” Berry is an educated farmer who is the sum of what he believes. Government, he believes, should take its sense of reality from the ground beneath our feet and from our connections with our fellow human beings.

Last summer, The Clinton County Planning and Zoning Board held a series of hearings as to whether or not industrial (skyscraper sized) wind turbines be allowed to be built in Clinton County. These hearings presented (under-oath) testimony from expert witnesses from all over the country (and Canada) on both sides of the issue.

One of the topics discussed and testified to in a 6-hour session was the question of property values. I am going to refer to research done and testified to in the hearings by Mike McCann of Mike McCann Appraisers, LLC. Mr. McCann has done decades of studies and appraisals of properties located near wind turbine developments. His studies indicate that losses in value can be up to 40% where turbines are up to 3 miles from homes. He referred to a current study by the Economic Financial Studies School of Business at Clarkson University. The Clarkson study clearly shows value impacts out to three miles…..and clearly shows the closer the turbine, the greater the impact.

I found it most interesting that some of the loss of value happens when communities get “wind” of a turbine project coming to their areas and even greater when the project gets built. The value continues to go down when people hear of pending and increased wind turbine projects coming to their areas or neighboring communities. These can be staggering, in my opinion, and cause a no-growth epidemic in counties with potential wind turbine project growth. I can only guess that is why you see abandoned farms and homes in the middle of turbines.

Lastly, but not surprising, I want to list a small portion of the reasons these will affect your property values. They cannot be disputed.

3. Sleep deprivation due to noise and flashing red lights.

4. Aesthetic impact due to introduction of large industrial-scale turbines into immediate neighborhoods, which affects perception of compatibility and view from residential property values.

On the last day of the hearings in Clinton County, over 40 residents got up and gave compelling testimony of their own. I will always remember when Clinton County resident Mindy Masters quoted her dad John Thompson with a phrase he always told her as a young child. “Take care of the land, because they aren’t going to make anymore.”

2 thoughts on “Take Care of the Land.”