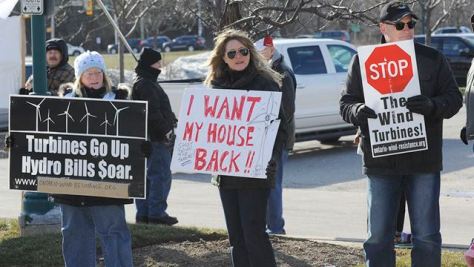 “I give wind turbines and solar panels a great deal of the blame for hydro costs,” said Lorrie Gillis, who drove from her country home near Flesherton, northwest of Toronto, to hold a picket sign reading “hydro bills $oar.”

Wynne gets cold shoulder from PM on hydro costs

Feeling more heat over hydro bills — and a cold shoulder on the touchy topic from Prime Minister Justin Trudeau — Premier Kathleen Wynne acknowledged her government has to do a better job curbing electricity costs.

Wynne was greeted Friday by protesters outside a luncheon speech in Oakville shortly after Trudeau was put on the defensive over hydro prices at a campaign-style stop in Peterborough.

“It is not enough,” the premier said of her Liberal government’s move to waive the 8 per cent provincial portion of the HST on electricity bills starting this month. ‎

While Wynne was taking responsibility for hydro rates that have skyrocketed in recent years and left many homeowners and businesses struggling, Trudeau, under fire for a Caribbean Christmas vacation on a “listening tour” of the country, made it clear electricity prices are Wynne’s cross to bear.

At a Peterborough town hall meeting, a weeping woman brandished her hydro bill for the prime minister, saying she earns “almost $50,000 a year and I am living in energy poverty.”

Trudeau, who has frequently campaigned with Wynne in a mutual support pact, praised the woman for speaking out publicly and tried to alleviate her concerns about the impact of looming carbon pricing on energy rates while insisting “hydro bills are provincial.”

Speaking with reporters after that emotional encounter, the prime minister tried to dodge questions about Wynne’s electricity policies.

“As a Quebec-elected MP I have been trained to be very, very careful about weighing in on provincial areas of jurisdiction. It’s something that is important for positive working relationships with all provinces and I respect provincial rights and responsibilities to make determinations in their areas of jurisdiction,” said Trudeau.

Wynne took credit for the Liberal government’s upgrading of the electricity system since taking power in 2003 so “there are no more blackouts…no more smog days,” but admitted “the cost of the changes has burdened people.”

She told 440 people at an Oakville and Burlington Chamber of Commerce chicken lunch about a father of three who wrote to her at Christmas to say he had to scale back on presents for his kids.

“That is unacceptable to me,” she said during a 25-minute speech, promising “to find more ways to lower rates and reduce the burden on consumers.”

“I have heard the voices of the people of Ontario and it’s the right thing to do,” added Wynne, whose speech was briefly interrupted by a shouting protester in the lobby outside the dining hall.

“I acknowledge the concerns. I’m not exactly sure what her issue is.”

Outside the conference centre, a smattering of hydro protesters were mixed in with United Steelworkers from Hamilton concerned the province isn’t doing enough to safeguard their pensions in the Stelco bankruptcy.

“I give wind turbines and solar panels a great deal of the blame for hydro costs,” said Lorrie Gillis, who drove from her country home near Flesherton, northwest of Toronto, to hold a picket sign reading “hydro bills $oar.”

“She needs to go and we need someone whole will start to put people first and put people over policy and money,” added Gillis, who heats her home with a woodstove to save on electric heating costs…..

One thought on “Turbines Go Up Hydro Bills Soar”