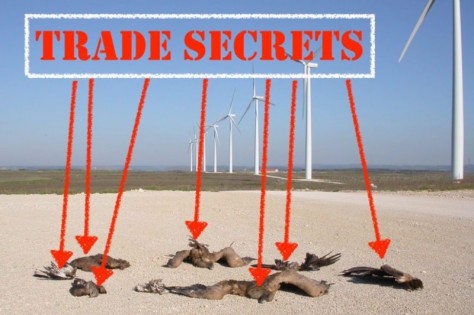 The “estimated” bill came in from the Freedom of Information office. I guess it’s the price of information. Sure isn’t free. It’s $625, but that should get us roughly 28,000 pages of wind turbine bird and bat mortality information from most of the 110 wind projects in Ontario. I still shake my head that this hasn’t been released already, but I suppose the numbers are too damaging for the industry.

If you can help out that would be very much appreciated.

I sent this letter on to the Ontario MPP’s, in hopes they would all pitch in $20, okay $10? How about a twoonie? Anybody want to bet on whether any of them will?? Could be rather telling – who truly stands up for transparency and open government. Who thinks this industry shouldn’t get off scot free for killing Species at Risk on a regular basis.

We have to talk.

It is no longer a matter of guessing what wind turbines ‘might do’ to Ontario’s birds and bats – you know what’s happening. Or, you should know. Wind developers have been filing bird and bat mortality reports with the Ministry of Natural Resources and Forestry for many years now. So, what do those numbers look like? Oh. Right… nobody really knows because they get filed away – far far away – from public scrutiny.

I left Ontario two years ago when wind turbines destroyed our land, and the habitat for all animals, including us. But I did not forget about the destruction that was taking place in my absence. I suppose I was hoping (as I usually do, hope is healthy, but rarely rewarded in Ontario politics) that the MNRF, or the media, or the researchers, or the nature organizations – somebody! – would keep a close eye on the bird and bat kill rates from these machines. I expected this, because I know that when LNG killed 7500 birds in New Brunswick in 2013, the world knew, as they should, and the company was fined $750,000 under the Migratory Birds Convention Act. Other industries have been held accountable for bird kills too – especially if Species at Risk are involved.

Not so for the wind industry in Ontario. Nope, wind developers obliterate an area’s raptor population in several months. If it relates to wind turbines – those deaths don’t even “happen,” it’s all in your imagination.

Frankly I’ve had enough of this. I’ve filed a Freedom of Information request for all the bird and bat mortality reports in Ontario wind projects. Hey, quick question: Do you know how many wind projects are in Ontario? I’ll give you a second to Google it, or look it up in your government files, but I don’t think you’ll find the answer because there doesn’t seem to be a comprehensive list of them anywhere. I tallied over 110 wind projects in Ontario. What are the chances someone is actually overseeing all the dead birds and bats found around the bases at all these wind projects. The MNRF didn’t even know of many of the wind projects I listed for them.

After three years of operation the wind companies don’t have to file these reports anyway, unless they went over their “limit” of kills. That’s a problem, because from the few reports I’ve seen, they go over the limit/threshold all the freakin’ time. In fact this very recent research article says that the average bat kill at an Ontario wind project is 24.5bats/wind turbine.

Back to the guessing game: Just how many bats does the government allow to be killed by a turbine? Answer: 10 bats. So the wind companies are currently killing, on average, over double the number of “permitted bats kills” per turbine!

Um, pardon me, but why the hell hasn’t there been a major uproar over this fact in legislature? Is it perhaps because the government isn’t even reviewing these facts, these data? Is it because a cumulative impact study on bird and bat population hasn’t even been contemplated by this government, ever?

I can tell you that my former home in Adelaide lost nine raptors in just five months last year, from just one of the wind projects there. Five of them were red tailed hawks, the other four were turkey vultures. I doubt there are many, if any, hawks left. This one simple fact saddens and enrages me. But there is more. Swallows are taking a huge hit – purple martins in the Summerhaven project. And the Threatened barn swallow – it’s one of the Top 15 killed in Ontario. What happens when NextEra, or Suncor, or Enbridge kills a Species at Risk? Do they get investigated? Do they get fined? Or do they just get another “permit destroy” like they did for the bald eagle nest in Haldimand County three years ago.

This is how serious Ontario really takes the environment.

If you are saying, “Oh no Esther, you have it all wrong. We are transparent. We are doing everything we can to help the environment,” then I have a simple request for you. Do one of two things, or do both. A) Make it mandatory that bird and bat mortality reports are made public, for free (past and present). B) Donate to cover my Freedom of Information costs. I’m doing the government’s job, so it would be nice to see the government pitch in a few bucks for this lapse in being an “open government”. Even you can have access to all these reports on a simple Google Drive link. It’s not rocket science to make it happen. It just takes a will.

PS – Re. the raptors killed in Adelaide, you should know that NextEra’s little 2-page public summary states they killed only 2 raptors. But the full report retrieved through my FOI states 9 — the 7 other carcasses were found outside the meagre 50m from the wind turbine base search area, or during times the carcass collectors weren’t regularly collecting, and for some reason those bodies don’t count. But, hey, they can say they are under the “threshold” of what they are allowed to kill! (Of course they are way the hell over the limit if they actually used the real numbers they found, but then, again, who’s watching?) 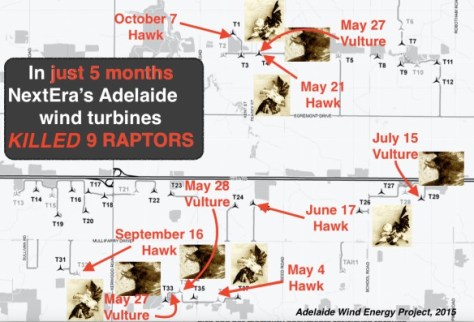 One thought on “We have to talk”