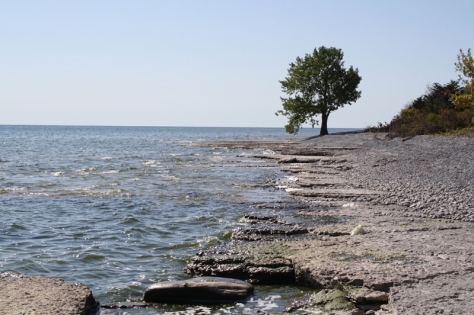 This changes everything. The decision by two Environmental Review Tribunal members to deny a developer from constructing nine industrial wind turbines on Ostrander Point, in Prince Edward County, this week restores limits to a bad law and puts boundaries between the Wynne government and the natural world—particularly endangered species. There is, once again in Ontario, meaningful protection for creatures that our government is willing to kill in the name of green energy.

Ostrander Point was always a bit of an over-reach. There is scarcely a more rugged and undeveloped stretch of shoreland on Lake Ontario than what lies between Points Petre and Traverse. It is perched in the middle of perhaps the most important migratory bird pathway in North America. Jutting into Lake Ontario, Prince Edward County presents an important resting place for birds preparing for or completing  a lake crossing.

Its wild shores provide the essential ingredients of life for a surprisingly diverse range of animals, birds and plants. The alvar landscape defines a rare and special habitat that deserves protection.

We used to care about such things. It mattered that the frailest creatures around us might be teetering on extinction. We took steps to ensure we didn’t purposely and knowingly contribute to their demise. We believed that we shared this planet with other living things.

So we established rules, regulations and laws to safeguard the most vulnerable. We taught the importance of natural ecosystems in school. We illustrated the fragile bonds that link the amoeba to our food supply and the interconnectedness of the natural world.

We understood these things once.

But then we became frightened. We were told the end was coming. Human activity was over-heating the planet and threatening our species, and our beach houses. Now it was personal.

How quickly we chucked our pretense for caring for the natural world. In 2009, then- Premier Dalton McGuinty, driven by equal parts arrogance and fear, enacted the Green Energy Act—a vile and poisonous bit of legislation.

Its primary goal was to eliminate the barriers to industrial wind and solar energy in the province. Developers and others insisted that McGuinty eliminate safeguards and protection established over decades. There was simply no other way to scale up to the thousands and thousands of industrial wind turbines the Premier dreamed of erecting across Ontario.

The Green Energy Act removed decision-making for these projects from local government. It diminished the Ontario Energy Board’s ability to guide the development of the province’s electricity system. No ministry was untouched. Each was ordered to fall in line and get out of the way.

Nowhere was this edict imposed in a more Orwellian contortion of purpose than inside the Ministry of Environment and Climate Change and the Ministry of Natural Resources and Forestry. These folks know the consequences of their actions. They know that when they sign a permit that enables a developer to harm, harass and kill an endangered species, they are doing something very bad for the beasts they have been entrusted to protect. To care for.

The Prince Edward County Field Naturalists (PECFN) knew this too. So they have fought back. For four years, they have battled the province and its ministries in a series of hearings and court rooms. Arrayed against a phalanx of lawyers representing the government, the developers and the industrial wind energy sector, PECFN has argued for mercy for the most vulnerable in the natural world.

This week, Heather Gibbs and Robert Wright drew a line. A line that had nearly been erased by the McGuinty government and the Green Energy Act. The Tribunal adjudicators ruled that the development of renewable energy doesn’t override the environment. They have made it clear that endangered species are deserving of meaningful protection—that no government ambition, noble or otherwise, can obliterate that.

Further, the Gibbs-Wright decision injects some much-needed humility into the discussion of the natural world and our role in it. They acknowledge that our knowledge of the forces shaping nature is incomplete. Yet our government signs pieces of paper that give licence to kill an already-weakened species—a species we know to be vulnerable. This is shamefully reckless.

The Gibbs-Wright decision now instructs future Tribunals to consider the principle of precaution—to weigh the risks of development versus walking away—not with certainty, but with the understanding that we can’t know the full consequences of our actions.

“…[government] staff should exercise caution and special concern for natural values in the face of such uncertainty,” wrote Gibbs and Wright in their decision this week.

It took six months to write this decision. It still must be defended—and vigorously so. It restores, for the first time in seven dark years, basic protection for the creatures we would discard in the name of saving the planet.

It is a turning point. Not just for turtles, bats and whippoorwills but for communities in Prince Edward County, Amherst Island and elsewhere in rural Ontario. By enunciating these principles and establishing these precedents, Gibbs and Wright have restored some balance to the debate between those who seek to safe-guard nature and a powerful government that sees nature as expendable.

It is cause for celebration.

One thought on “Celebrate”