Another Kafkaesque industrial wind turbine nightmare in Ontario. A regional airport (Collingwood), with an aerodrome close by (Stayner), and eight 500’ (152 metres) air-space-invading industrial wind turbines (wpd Canada’s Fairview Wind Project) to be wedged between both airfields, posing grave danger to pilots and their passengers—and the whole thing approved by the Ontario Liberal government. 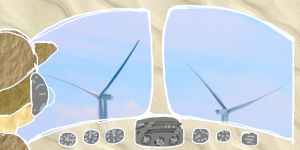 What could possibly go wrong when pilots, flying visually without instrumentation (as is the case in over 90% of the flights at these two airports), have to negotiate a safe take-off or landing through a blur of Georgian Bay fog, or lake-effects snow, and an indiscernible phalanx of gigantic 50-storey-tall white windmills?

All eight of the planned wind turbines will “penetrate” the safe arrival and departure airspace mandated by Transport Canada standards.

The Collingwood-Stayner airspace is a no-man’s-land of regulation, a lawless vacuum with respect to wind turbine installations. Ontario’s Green Energy Act deliberately