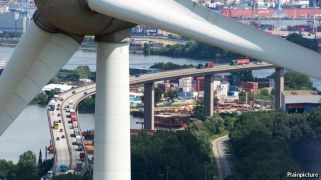 ON A BREEZY, sunny day in north-east Germany it seems as though the world is running on renewable energy. Near Altentreptow 50-odd giant wind turbines, the tallest 200 metres high, spin above a potato field, making a gentle swishing sound. The hum from the base of each turbine is the sound of electricity being generated, much of it bound for Berlin. The view from the wind farm, across flat fields, is of another wind farm.

Sadly, this is not how the world’s power is generated. In truth, the view from Altentreptow does not even properly reflect how Germany’s power is generated. The battle to drive carbon dioxide out of the world energy system, which accounts for about two-thirds of human greenhouse-gas emissions, has seen some heartening and visible advances. But clean energy is still being soundly thrashed by the dirty sort.

Even as the wind turbines and solar panels began to spread across the fields of Europe, an ancient black fuel was making a comeback (see chart). In 2000 the world’s coal-fired power stations were capable of producing 1,132 gigawatts of electricity between them, according to Enerdata, a Paris-based research firm. By 2014 so many new power stations had been built that they could put out 1,980 gigawatts. Coal, which is about twice as polluting as natural gas, now supplies 41% of the world’s electricity and 30% of its overall energy needs.