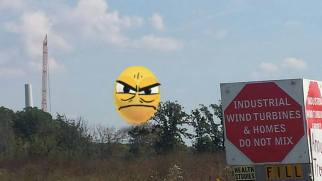 A key point of contention against wind (and solar) farms is that they require much larger amounts of land to generate the same amount of electricity, an important downgrade of their “greenness” that goes conveniently ignored. Wind power is naturally intermittent, and plants typically operate at about 25% of full capacity, compared to coal and natural gas plants operating at 90%.

Thus, it can take 4-5 wind plants to produce the same amount of electricity as a single fossil fuel plant.

The U.S. Department of Energy has concluded that generating 20% of electricity (which is likely the highest we could go, see here) with land-based wind installations would demand at least 20,000 square miles, or the size of Maryland and Vermont combined. By comparison, all U.S. nuclear power plants, which produce around 20% of power, occupy only 110 square miles.

The main reason industrial wind farms take up so much land is that each turbine can be spaced a half mile or more apart. And bigger, taller, and more spaced apart turbines are better because they can generate more electricity. Standing 650 tall (200 meters), these giant wind turbines dwarf nearby buildings. Along with the complexity of siting, this explains why getting wind farms built is much harder in real life than in the Sierra Club’s mind.