CRYSLER — A North Stormont woman is concerned about potentially harmful dust clouds blown onto her property and those around her as access roads are being built for the Nation Rise Wind Farm.

Laurie Harkin-Chiasson was shocked to learn the dust billowing from the construction contained Portland 10 cement powder, which can cause skin and respiratory irritation and serious eye damage. Harkin-Chiasson said she and her neighbours weren’t notified of the construction on July 11, when she warned her neighbour who was walking with her infant in a stroller as the clouds came through, nor were they notified on July 15 when construction resumed nearby her home.

“I’ve taken it upon myself to stand up for my community,” she said.

The clouds came from a soil-stabilization procedure being done to build the access roads to the 29 wind turbines. The procedure involves removing the topsoil and blending the soil below with cement, before covering the surface gravel to secure the floor for paving.

“I could feel it in the back of my throat,” said Harkin-Chiasson.

The safety data sheet (SDS) from Lafarge, a cement and concrete company, said long- and short-term exposure to the dust of Portland 10 cement can cause severe skin burns, eye damage and may cause respiratory irritation. It may also cause acute silicosis, which “results from short-term exposure to very large amounts of respirable crystalline silica,” according to the SDS sheet.

Harkin-Chiasson has taken the matter to EDP Renewables, the company that owns the wind farm, along with North Stormont council, the Ontario Ministry of the Environment, and the Ministry of Labour.

According to Harkin-Chiasson, it took two calls to the ministry before the EDP began sending notices.

She was particularly angered when she was told through the ministry the company had offered to wash the cars of those affected by the dust.

“Our community’s health and safety is at risk. I was so insulted,” Harkin-Chiasson said. 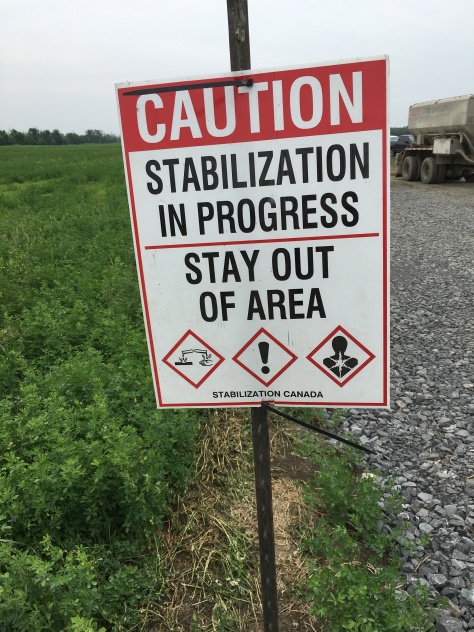