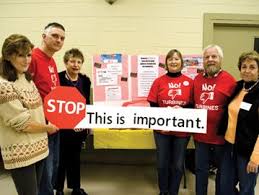 Last week township council voted to approve a motion by Alderman Betty Konc calling on the province to review its current renewable energy process. Konc explained the motion is yet another attempt for the town to gain some traction in the continued effort to stop wind turbine development in the area.

“It’s a motion born out of frustration,” said Konc, noting under the current Green Energy Act the township cannot outright stop the construction of turbines that some have associated with health risks and declining property values.

The township did attempt to initiate a two-kilometre setback requirement for turbines, a move later quashed in court.

“They need to stop this nonsense,” said Konc of the province, adding, “we have the right to say we don’t want a Tim Hortons…